As super heated air rises, it is replaced by cooler, oxygen rich air from the outside which feeds the fire triangle. As the wildfire grows in intensity, the greater the updraft. This thunderstorm effect creates a plume of superheated air and burning debris. The prevailing winds bend this plume over where it is going to go, preheating and drying out fuels, both manmade and nature made. Ignition is provided by aerial firebrands, dropping from the sky. Bodies of water have no effect on stopping the spread of this type of wildfire—as evidenced during the Ham Lake Fire.

Besides firefighters, the saviors in the Ham Lake fire were wildfire sprinkler protection systems installed on many cabins, homes and businesses. Post-fire aerial views show islands of green surrounded by black scorched earth. While 140 structures burned, over 750 survived. According to Senator Amy Klobuchar: fire prevention measures like sprinkler systems and the fire prevention programs which combined are credited with saving an estimated 759 buildings—over $42 million in value. 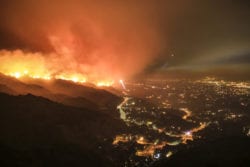 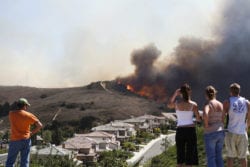 The Importance Of Wildfire Sprinkler Installation In California 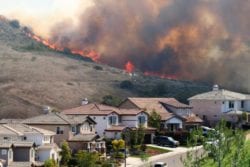